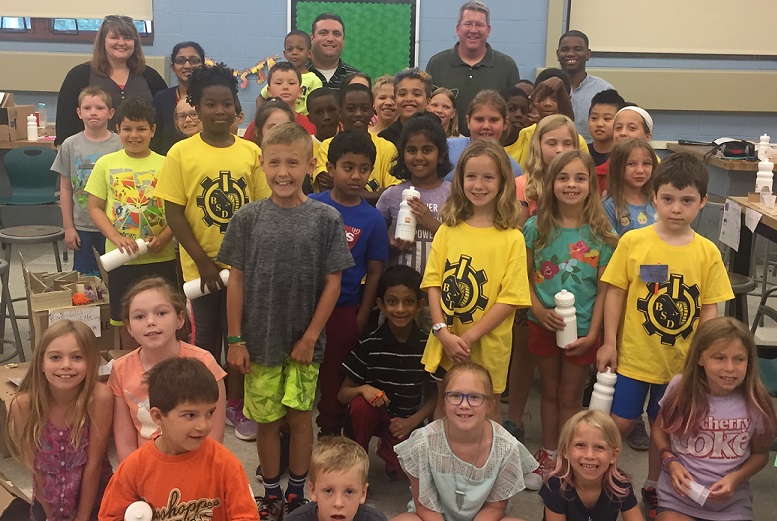 Newark, Delaware (July 26, 2017) – DecisivEdge™, LLC, a leading business consulting and technology services company is proud of our five associates who recently spent several hours with some very bright 4th and 5th graders of the Brandywine  School District. The students were introduced to the exciting world of Science, Technology, Engineering and Mathematics also known as S.T.E.M.  “The joint summer technology-academic camp was  was a major success”, said teacher Jackie Chesworth.

Science is simply everywhere and Technology continuously expands into every aspect of our lives. Engineering is the basic design of roads and bridges, but also addresses the challenges of global weather and environmentally-friendly improvements to our home. Mathematics is prevalent in just about every occupation. An academic curriculum that is S.T.E.M. based provides real-life situations to facilitate student learning. Programs such as Engineering For Kids integrates multiple disciplines  to provide students with opportunities to understand how concepts relate to life in order to hopefully ignite  a passion for a future career in a S.T.E.M. field.

According to the U.S. Department of Commerce, “S.T.E.M. occupations are growing at 17%, annually while other occupations are growing at a slower 9.8% pace. S.T.E.M. degree holders have higher incomes than non-S.T.E.M. careers. These disciplines play a key role in the sustained growth and stability of the U.S. economy, and are a critical component to helping the U.S. win the future. S.T.E.M. education creates critical thinkers, increases science literacy, and enables the next generation of innovators. Innovation leads to new products and processes that sustain our economy. This innovation and science literacy depends on a solid knowledge base in the S.T.E.M. areas.” It is clear that most jobs of the future will require a basic understanding of math and science. Despite these compelling facts, mathematics and science scores on average among U.S. students are lagging behind other developing countries.

“Who Thinks Faster and More Accurately”: Students Compete with a Database

“During our opening discussions we explained to the students the basics of building a database and why they are used to store and sort data”, said Andrew Yonce.  Following a short introduction, the students were asked to participate in a brain teasing exercise. The team set up a game of “Who Thinks Faster and More Accurately, You or the Computer” by incorporating the descriptive film credits obtained from the covers of eighteen DVDs into an access database, then setting up a query routine. The objective of the game was to set up a timed race between the database query and five students to determine who could answer movie questions with greater speed such as: “How many movies were classified G, PG and PG-13?”  or “How many movies were released before 2002?”, and finally, “How many of the movies starred Robin Williams?”

Following the conclusion of this fun exercise, the team also spent time discussing some details about several types of technology and what students should study in order to prepare for these exciting prospects.  “Some of the positions we discussed included User Interface/Graphic Designer, Application and Database Developer, Business Analyst, and Project Manager,” said Andrew Yonce.

“We look forward to scheduling another camp next year with both Middle and High School Students,” said Mike Frayler, Managing Director for DecisivEdge.